Diversity and Multiculturalism are Keys to Expansion 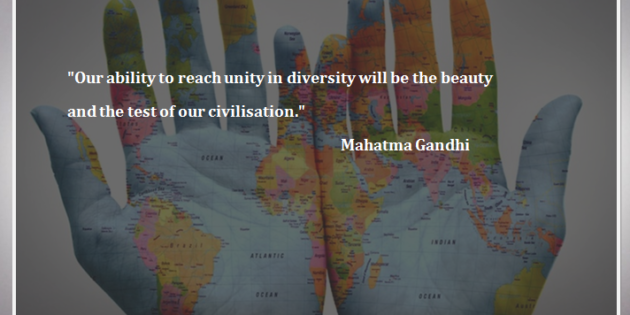 Separation of ourselves from others – whether it be individuals, groups, communities, countries – can mean we miss out on so much growth, getting things done, fulfillment and so much more.

Yet, many of us are ‘taught’ to remain separate as a consequence of beliefs and behavioural habits, which we learn from our family, friends, communities, culture and experiences.

This desire to be separate from others often comes from a place of fear. This includes fears such as connection and getting hurt, losing our own identity or freedom, rejection, not belonging, doing things out of the comfort zone that make us feel uncomfortable and so forth.

The antidote to this fear is the opposite to separateness. It’s choosing to connect, and at the end of the day: love.

And if we face our fear and choose connection, our courage shows up, which allows new experiences and therefore growth. And this can potentially dissolve differences. And although the differences may still be there – if we embrace, value and appreciate them – we can also connect.

Dr Yvonne Sum and Mark Dickson of 5 Echo (www.5echo.com) – a leadership development consultancy based in Kuala Lumpur, working with senior leaders, businesses and teams – know these principles only too well on many levels. They are living proof of working in and within a diverse and multicultural team or environment.

Obviously male and female, they were born and lived in different states within Australia. Yvonne moved to Malaysia when she was two and spent her formative years there until aged 15 and then moved back to Sydney, Australia.

And Mark grew up in country Australia, and was posted to Europe and Asia in his 20’s as part of his roles in the army.

Mark and Yvonne also respond to and experience their world through very different ways. For example, Mark is more reflective and pragmatic, while Yvonne is more spontaneous and ‘gut’ oriented.

They met in recent years in the very diverse country of Qatar in the Middle East. Qatar’s population is made up of many different nationalities from all five continents where the local population is a significantly lower percentage versus the total population.

All of this means they both recognise they bring various perspectives, experience and knowledge which they believe is the foundation of what makes them a potent combination. So together, they created 5 Echo in multicultural Malaysia.

Dr Yvonne Sum says, “In team coaching, it’s the diversity that makes the team strong. And in the world, it’s so good to know there is so much difference and it can be used for synergy as opposed to using it for fear where it can be used to separate each other in small groups to control.”

Separation leads to the silo mentality that is often experienced in organisations, where people are working in their own bubble. And this can end up in poor communication, lack of teamwork and poor performance across teams and establishments.

Yvonne says their strength comes from bringing a different perspective: “The fact we have different genetics and different exposures – because Mark’s work around the world has taken him to different regions (Europe for example), and that we bring in the gender difference and the integration to have the woman’s point of view and the man’s point of view.

“It’s almost like – if you think of the traditional tribe with the mother and father; we do bring different strengths, and I think people see us as role models and that difference works.”

Mark explains not only does their ability as coaches and people bring a unique perspective when working with diverse cultures (which supports the creation of trust with the teams they work with) he says, “we notice different things (from one another) and can bring different perspectives when coaching an individual and teams.”

And the bonus he says, “We are noticing that this is deepening our own coaching skills.”

The key Mark says, is to recognise there is always something new to learn when working with diverse cultures. He clarifies this by saying, “I was living in Qatar for seven years, and I was still learning the culture, and I’m an avid learner!”

“Culture is so complex and that to work well in a multicultural society, we’ve got to keep learning, keep questioning and leave our ego out of it, as its not about ego,” describes Mark.

As both Mark and Yvonne also importantly recognise, there is no wrong or right, and it’s about respecting people’s opinion and remaining humble to build an environment of trust. And in this place, that’s when we can ask powerful, thought provoking questions to support individuals and teams to identify blind spots in thinking and open up hearts and minds to embrace the unique gifts we all bring to the world.

Stay connected with news and updates!

Join our mailing list to receive the latest news and updates from our team.
Don't worry, your information will not be shared.

The Power of Loving Presence in Coaching: What It Is, Why It's Important, and How to Access It Jun 27, 2022
FEEDBACK: The Most Empowering Personal Growth Tool You Have... May 08, 2022
How Do Coaching Skills Support Being a Better Leader?
coaching empowering empowerworld have leadership podcast skills
Jan 24, 2022
Close

Receive our bi-weekly blog articles, podcasts and invitations to our events and training's sent straight to your inbox.